The following is a reprint from the University of Montana School of Journalism web site. I wrote the essay as a reflection on my semester as a Pollner Professor.

You can read more about the T. Anthony Pollner Distinguished Professorship here.

Read the essay in its original location.

View a PDF from that page. 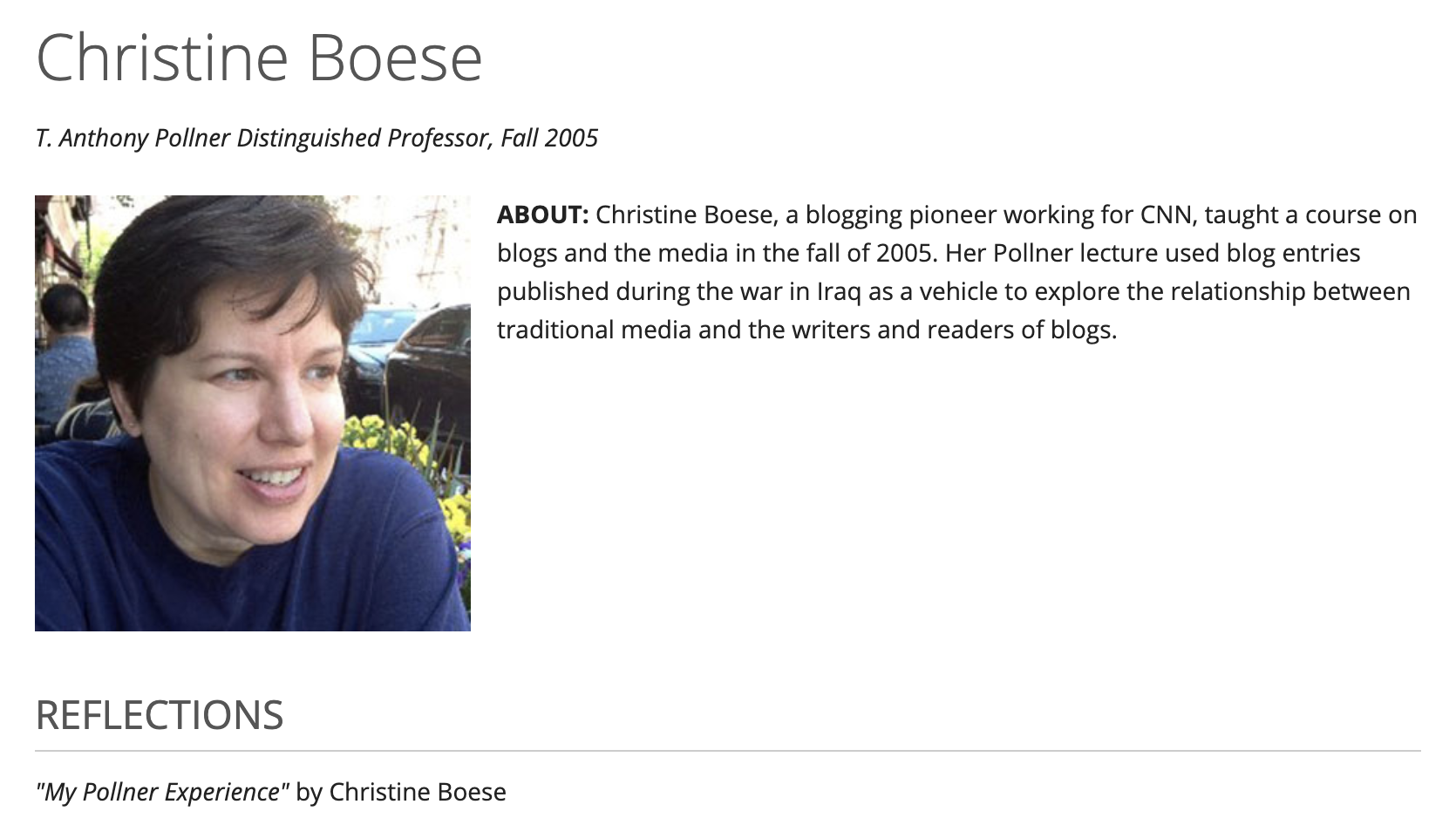 “My Pollner Experience” by Christine Boese

To say that I was a bit of a fish out of water when I came to Missoula might be an understatement.

True, I’d grown up in Alaska and traveled and camped extensively throughout the Midwest and West. I am no tenderfoot. But since the early 1990s, I became obsessed with the study of cyberspace, cybercultures, radical democracy, independent media and voices that weren’t necessarily backed by the power of a major corporation. I’m the kind of person who has found the work she loves, and that’s about the worst thing, because I’m my own workaholic.

Somewhere along the way I started seeing myself as a citizen of cyberspace first, and in the walking-around-world second. I was happy, but people often worried about me. They sent emissaries to try to get me to come out and play. “What was I missing?” I wondered.

In coming to Missoula, I knew I’d have a good opportunity to give the walking-around-world another chance, because here was a place as idyllic as anything I could imagine, a college town, a tranquil yet interesting campus populated with deer the way squirrels run around on most campuses. A river runs through a downtown haunted with hundred-year-old structures. Bike trails are everywhere. It’s surely a paradise for dogs, and I take my mutt with me everywhere I travel. Not to mention the fact that I was hoping for snow and a chance to hit the ski slopes. Montana did not disappoint.

People here care about where their food comes from, and the farmers’ markets promise abundant feasts on healthy, living things. I’m told Missoula is in a region that could sustain itself with locally-grown food if something bad and apocalyptic were to happen, and I believe it. In some ways, Missoula is like an island tucked over here on the other side of the Continental Divide.

I’d grown up hearing stories about the J-school in Missoula, and over the years classmates in other places would tell me about their “triggering town.” What better place to pull my head out of the computer for a while and find some good people and good conversations?

Folks may think I’m a big gearhead, but conversations are what I’m all about, not the machine itself. Dan Gillmor, author of the book “We the Media” that I used as a primary text for my Pollner seminar on blogging and the citizen journalism movement, has adopted the emblematic slogan that “news should be a conversation, not a lecture,” and I found my way into the Blogosphere because of the magnetic force of its dialogues, its probing and prying, and yes, its flame wars.

As I emerged, blinking, in the Montana light, I found people who were engaged in a different kind of life, the life of their gardens, their communities, their state. Faculty focused on teaching the timeless values of asking hard questions. Students came to Missoula not just to milk careers out of college, but instead to use college as a time to engage fully with the landscape and activities all around them.

They didn’t spend very much time on their computers at all. How did they do it?

I didn’t get to ponder that question for very long, because shortly after I got settled in Missoula something happened that turned my sensibilities upside down: Hurricane Katrina.

I should mention that I didn’t just pull back from cyberspace in taking the Pollner Professorship. I also live deep in the 24-hour news cycle of CNN Headline News newsroom, and since one month before 9/11, I’ve been holding in my head the details of just about every majorbreaking news story around the world, and a lot of minor ones too.Besides covering wars and terrorist attacks, I’m a bit of a weather nut who once chased storms with my camera around Arkansas and Oklahoma. The leading arm of what was Hurricane Ivan actually passed right over us in Atlanta the previous year. Before coming to Missoula, the last big story I’d covered was the tsunami and its effects around the Indian Ocean. I don’t go to these places. I cover the stories “virtually,” from Atlanta.

It doesn’t occur to me that people don’t obsess on cable news the way I do. I stayed up all night watching Katrina’s eyewall come ashore. When I came to my class later that day, many students were just becoming aware that there had been a big storm somewhere far away, but the effects of that storm soon rose up and enveloped us all. Students working on the Kaimin worked hard at pulling local angles for their Katrina coverage, and I was proud of how they came to shape and package the Katrina-related material, to bring the impact of what had happened to a student body that can seem a bit disconnected from larger, global events.

Katrina also provided an object lesson in what the blogosphere does best, and it gave the Pollner Seminar plenty to study from the bloggers and citizen journalists, not to mention outstanding coverage under duress from the New Orleans newspaper’s online site. One student in my seminar found a person blogging from a ten-story building with a generator in New Orleans, right in the middle of the worst flooding. Prior to Katrina I’d been surfing the science/weather blogs, checking conditions like a nervous mother, but as the events afterward unfolded, bloggers rose up in a chorus, detailing exactly how the relief effort was being botched, sharing first-person stories of truck drivers ordered to take loads of ice everywhere except to New Orleans.

We read stories of rescues, of unimaginable horrors. We saw bloggers helping to reunite families, and coordinating massive charity efforts through cyberspace.

And we also saw journalists from CNN and other mainstream venues begin keeping Katrina blogs, first-person accounts, as the television coverage left its objective tone behind and began reacting emotionally to the tragedy and incompetence.

In the Pollner Seminar, in addition to keeping individual blogs, students also participated in a 24-hour virtual class blog, our group discussion space. I kept it behind a firewall, so students could speak freely and comment without restriction about what we were reading and finding. We also used the space to share links and follow trails around the different spaces in the Blogosphere. For me, this was where some of the best interactions of the seminar took place, and it enriched our classroom discussions considerably.

One of my primary jobs as the Pollner Professor was to assist with the online Web site for the Montana Kaimin. I helped convert the site to RSS feeds so it would be subscribable on news feed readers like Bloglines.com. Web editor Denny Lester became a regular fixture in my office as we worked through a series of logistical nightmares plaguing the site, from a non-working search engine to an inconsistent archive. We explored different content management solutions that also left room for the Kaimin to incorporate blogging columnists and guest bloggers in the future, such as the idea of a professor blogging from Pakistan while participating in an earthquake relief effort, or blogs for students studying abroad, or even ROTC students posting updates from Iraq.

Ultimately we had to abandon the existing content management system and begin the process of transitioning the Kaimin to a new platform. The better part of that job is in Denny’s capable hands right now, and I’ll still help him however I can, from where I am now, back in my virtual home in cyberspace.

There were some things I wish we could have tried with the Kaimin site, like setting up a subscribable mobile phone-blogging feature, so students could get text messages of quick headlines on their cell phones, say of sports scores, or quick bulletins announcing that the governor is on campus, and where he was speaking. I’d like to see student government representatives given space to blog on the Kaimin site as an ancillary to the Kaimin’s traditional meeting coverage.

But the bigger problem is that University of Montana students are immersed in life more than they are immersed in technology. Students and faculty are still learning that there are news feed readers that can give instant headline summaries. The pace is different here. Back where I come from, people want quick text message updates on their cell phones. Studies show that since the Iraq war, more and more people are getting their news from the Internet, and compiling their own customized sources.

Yet at the same time, one of the most innovative citizen journalism ventures in the U.S. is based right here in Missoula: NewWest.net. I was very excited to meet the first Pollner Professor, Jonathan Weber, and to observe how the interfaces and communities of New West are structured. I know that people at CNN.com are watching sites like New West closely as well. It is a difficult thing, building community, encouraging ordinary people to find their voices and speak out about what is happening, about the walking-around life in their communities, and to get them to go into cyberspace to do it. New West is sponsoring WiFi hot spots around town, to bring the site to the people in the places where they have conversations, a terrific idea.

I fully believe this is the last bridge to be built for cyberspace communities to be truly vital, which is for them to migrate from face-to-face into cyberspace. I’ve always struggled when it comes to bringing groups I know face-to-face into cyberspace. I wish New West the best of luck, because in some respect, I believe ventures like these are our last hope, not just because so many small newspapers are just gone, but because the dialogues of the public square are disappearing as well, and I want them to come back.

And while I may be content to live here, inside this little box, people who live large, in big sky country with big mountains and big fish, can get cramped in these tight spaces. They want to escape from boxes. This is what I learned from the people of Montana. Where I find life in cyberspace, they long to escape.

What I wish for them: electronic “paper” to attach to the front of your fridge with a magnet, not to tell you the milk is sour, but rather, a newsfeed reader, with headline summaries in type big enough to read before you’ve had your coffee, before you hit the bike trail, before you head for the ski slopes.

The headline feeds tell you if there’s something inside that computer box worth reading quick before you head out to bigger and better things.

They tell you so you can wait just a bit and not miss a Hurricane Katrina or an earthquake in Pakistan. Why? Because John Donne not only said “No man is an island, apart from the main.” He also said, “Send not for whom the bell tolls. It tolls for thee.”

Thank you to the University of Montana Journalism faculty and students, and so many others who also had me in to speak to their classes, for sharing their lovely campus, stimulating ideas, and hard questions with me.